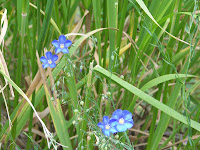 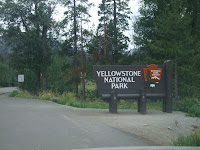 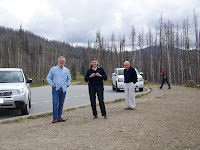 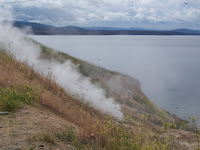 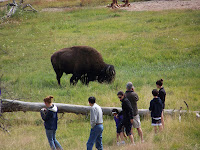 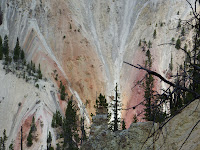 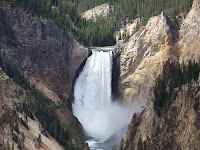 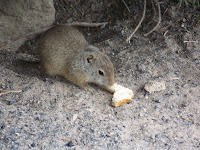 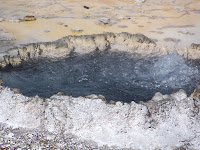 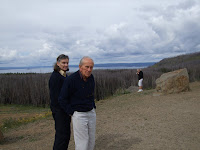 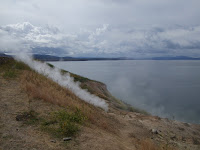 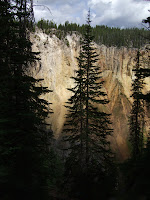 Ah, Yellowstone! It is one of our very favorite places. This was our second visit, and it was as wonderful on the return visit as it was on our first. We took Jack & Anita with us, so they could see some of the wonders. The park did not disappoint. There was no getting stuck in a buffalo traffic jam for 30 minutes, but there were plenty of buffalo to be seen, many at close range. There were bunches of Uinta ground squirrels where we ate lunch; we really enjoyed watching one who was under close observation (from a suitable distance) by a leashed black lab. Just before we left we encountered the three female elk lying in a meadow. Old faithful was somewhat disappointing. The eruption was only about half what we saw last year. However, on the positive side, it happened within the specified 20-minute window. Harry & I decided to walk around the geyser area, and ended up watching the eruption from across the river. It was neat seeing other geysers, including the one that was going off when we drove into the parking lot. Though it was not as big as Old Faithful, it put on a great show. When we started walking around the area we saw the anemone geyser, dry as a bone. After Old Faithful, when we walked back past it, it was erupting. Someone had told us that the anemone geyser sounds like a toilet flushing when it finishes - and we did hear that. 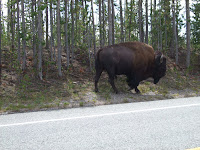 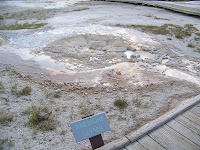 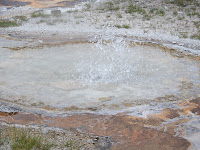 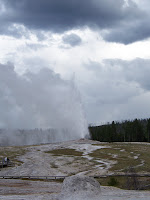 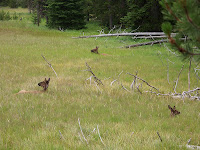 Having other people with us meant we didn't see as much as we would have on our own, but it was still a pleasant day.
We did have one bit of excitement; I was driving us back to Daphne's after dinner, when it was about dark. All of a sudden I saw a deer in the headlights, and when I braked & swerved toward oncoming traffic to get out of the way, I saw there was a second one following close behind. I landed harder on the brakes. We missed the deer, and all of us survived just fine, not even too shook up by the incident. We are all grateful for the way modern automobile technology enhances any driving skills we might have. Harry & I decided that when it was time to leave Cody, we would drive through Yellowstone again on our way south, since we wanted to go to Grand Teton National Park.
Posted by Jesusan at 10:54 PM