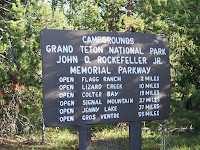 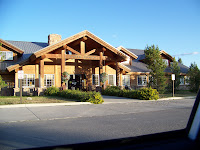 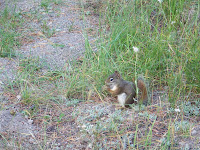 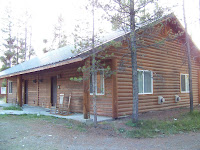 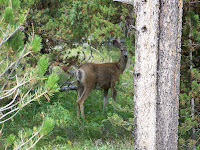 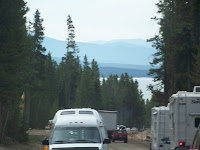 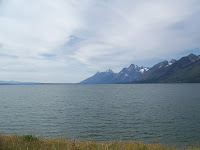 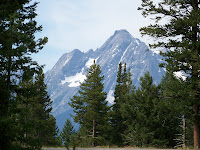 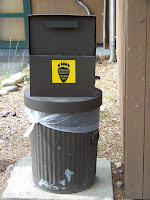 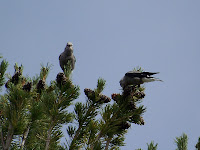 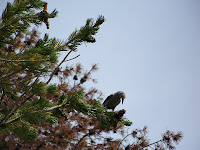 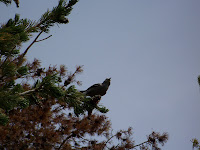 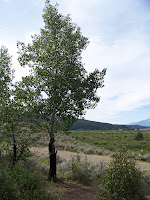 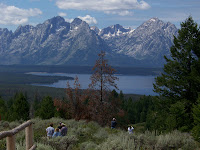 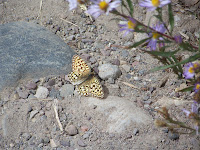 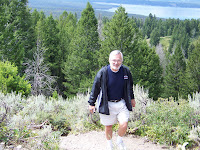 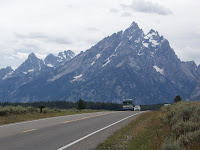 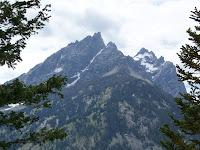 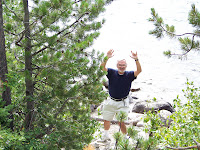 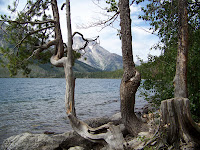 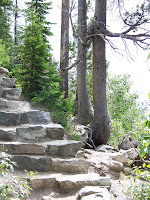 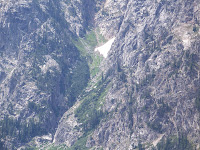 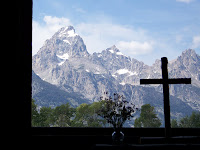 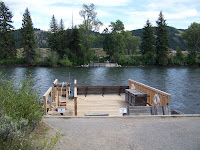 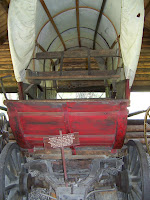 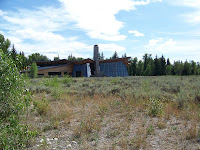 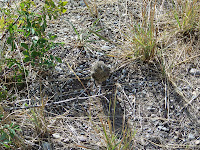 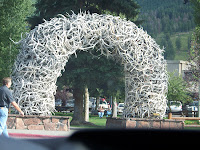 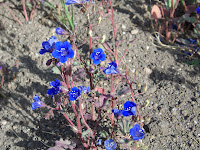 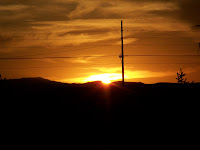 I was looking forward to seeing the Grand Tetons up close; as a child I had a beautiful jigsaw puzzle showing them and Jackson Lake. We got up refreshed after a good night's sleep, and when we got on the road we very soon encountered a traffic jam. The Rockefeller Parkway is undergoing major construction, so the going was very slow. That was not all bad - we got to photograph the mule deer and really absorb the scenery.
We stopped at Willow Flats, which offered not only a nice view, but also an opportunity to watch a flock of Clark's Nutcrackers attacking pine cones, which they did with great strength & gusto. The wildflowers and butterflies were also quite interesting.
Another great viewpoint was the top of Signal Mountain, where we had a panoramic view of the area.
Jenny Lake (North) was another worthwhile stop for sheer beauty. Daphne had suggested we stop by the Episcopal Chapel of the Transformation, near Moose. It is a cute little log chapel, and instead of a stained glass window behind the altar, there is a picture window with a perfectly framed view of the Grand Tetons. Just a short walk beyond the chapel was a general store, Menor's ferry, a shelter with old wagons, stage coaches and the like; and a log cabin that had belonged to someone of significance to the park. Our last stop in the park was the Craig Thomas Visitor Center at Moose. It is a beautiful building, and while there we saw an excellent movie presentation about the park. The most memorable part of that visit was an encounter with a bird that turned out to be a juvenile Sage Sparrow. It had no fear of people and just kept about its business, even with Harry closely following it everywhere with his video camera.
After exiting the park we drove into Jackson, WY, which is a very pretty town. I especially liked the antler arch in the city park. After a brief stop we continued on to Pinedale, where we decided to spend the night, since we were tired from a long, intense day of sightseeing. We were trying to figure out where we wanted to eat dinner, as we were driving down the main street, and both of us at the same time saw the sign for the Wind River Brewery; where to eat became a no-brainer. The beer, the service and the food were all great there, and we would recommend it to anyone who likes really good beer. The sunset photo was taken from the parking lot of the brand new Hampton Inn where we spent the night.
Posted by Jesusan at 3:41 PM