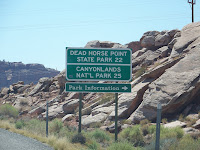 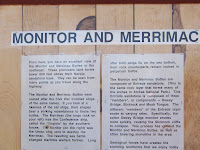 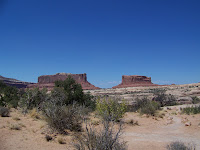 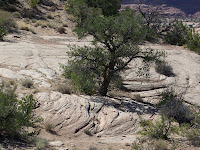 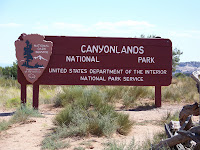 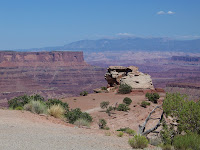 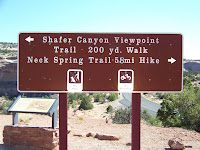 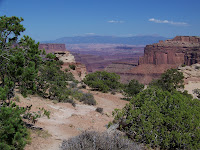 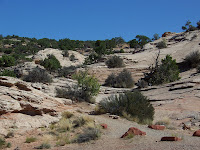 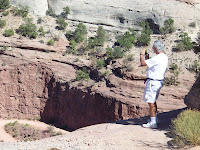 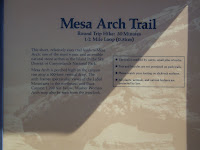 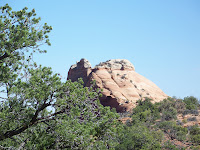 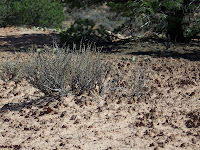 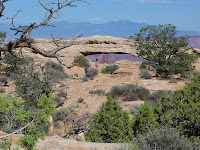 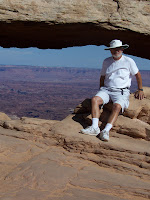 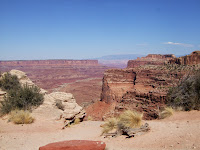 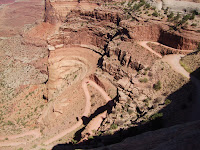 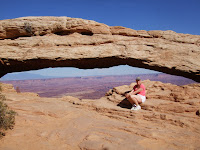 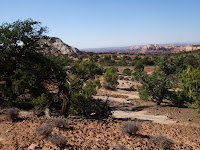 After lunch we headed toward Canyonlands National Park. I was amazed by the overlooks and scenery prior to entering the park, like "The Monitor and The Merrimac". There were also many interpretive signs detailing the plants and wildlife that can be seen in the park.
Once we got into the park we took a turn onto a road for 4-wheel drive vehicles. The views were gorgeous, but I'm not used to driving on that kind of terrain, so it was a bit hair raising for a while. We were mostly on Route 313, the main road through the park, on the Island In The Sky. The vistas were amazing, wherever we stopped.
We decided to do the walk to Mesa Arch, since it was only half a mile. That was an amazing walk; we were looking at something we thought might be the arch, and had just decided it wasn't, when the arch appeared very suddenly in front of us. There is a sheer drop just beyond the rocks we are sitting on in the photos. The sagebrush photo just before the arch shows the cryptobiotic soil, which is a crust actually made up of living organisms - bacteria, algae, mosses and lichens, all of which are very slow growing. They help to retain water, bind the soil together, and provide a source of nitrogen for other desert plants. It is very fragile, which is why there are signs everywhere to stay on the marked paths, both here and in Arches National Park.
We spent several hours at Canyonlands and then headed back to Moab and the Moab Brewery for dinner. Canyonlands is beautiful, but it is also a more primitive park, better for those who like to hike and camp; all their facilities are primitive, something markedly lessens the park's appeal for me.
Posted by Jesusan at 10:39 PM