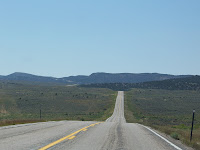 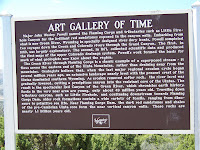 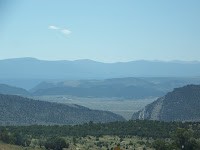 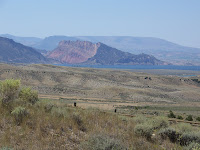 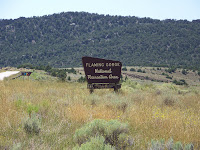 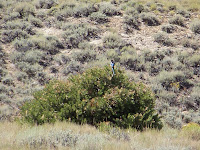 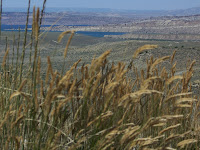 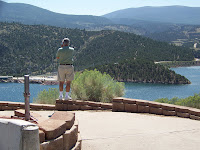 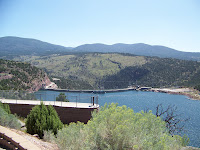 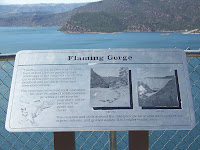 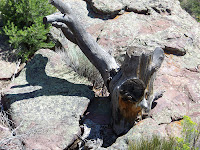 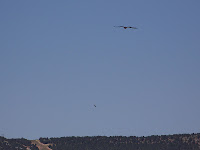 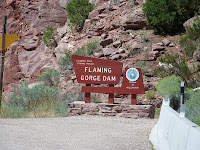 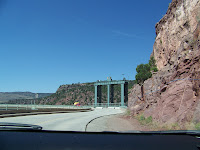 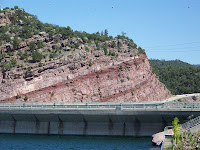 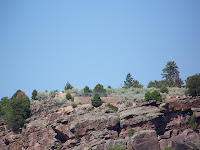 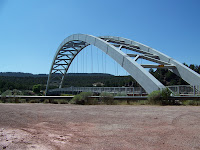 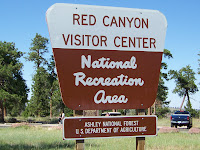 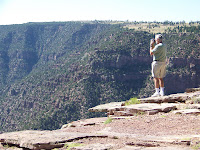 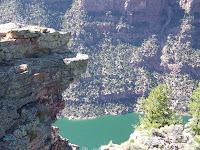 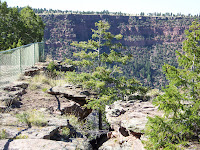 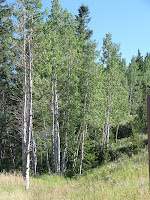 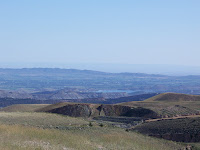 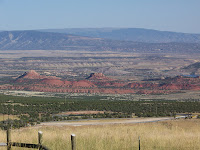 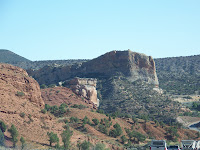 Today we had an absolutely gorgeous drive from Wyoming into Utah. There are two routes through Flaming Gorge - US 191 and the Green River route that goes along the river. We elected to take 191 this time; we saw lots of rolling countryside which gradually developed into flaming gorge. The reservoir became visible from quite a distance. We stopped in Dutch John for gas, and a lady who worked there told us it was worth taking a little side trip to see Red Canyon. We stopped at an overlook where we could see a large portion of the reservoir and the dam. The view was wonderful, and we enjoyed watching several ospreys soaring in the sky. We also stopped at the visitor center at the dam, which is a nice one to visit. They also have a lot of interpretive signs. It took a search with binoculars to find the outlook we'd stopped at, but my camera was able to pick it out easily. The road took us over the dam and over that beautiful bridge.
There was one overlook on the way to Red Canyon that gave us a small taste of what was to come. The area around the visitor center is incredible. It is perched atop a very high cliff; of course daredevil Harry had to walk as close to the edge as he could to video the river. At this point the Green River truly is green in a red canyon. The views were spectacular. We could see small boats on the water. There was plenty of fencing (for which I was grateful), and many significant fissures in the rock. In one there was a good sized tree growing out of the rock.
On the road into the visitor center, we saw a couple of fat, blond creatures that undulated when they moved. Unfortunately we were unable to catch them with our cameras, but the visitor center volunteers were able to tell us that they were yellow-bellied marmots. The way they moved reminded me of giant, blond fuzzy bear caterpillars.
From Red Canyon we headed toward Vernal, UT, where we planned to spend the night. The scenery was once again spectacular. I was pleased to see groves of Aspens; this was a first for me. We were surprised to find that there is a brew pub in town - the Dinosaur Brew Haus. Their beer is now brewed in Park City; the brand is Squatters, and it was quite good. The food was okay, not great.
Posted by Jesusan at 7:13 PM