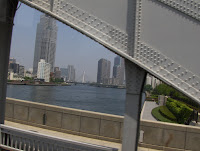 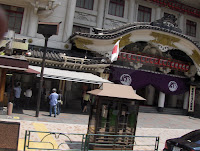 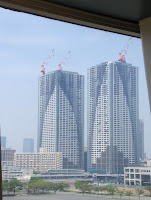 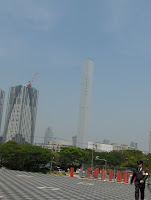 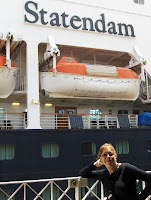 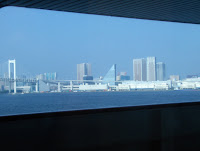 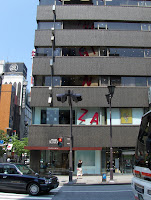 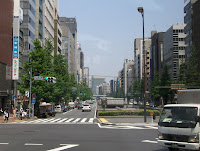 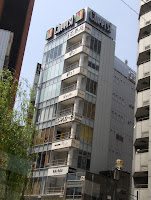 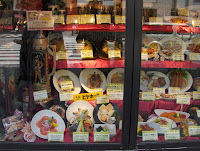 After departing Osaka, Tokyo and Hakodate were our next stops. We went ashore only briefly in Tokyo, because our priority was unpacking our luggage, which had finally been delivered to the ship. We had originally thought we would need to take a 1.5 hour very expensive train ride to Narita Airport, to the customs warehouse to retrieve our luggage, but thanks to the hard work of our travel agent and the people of the Statendam's front desk, the luggage was delivered. In our relief, we went ashore to find an Internet cafe, and to be able to add Tokyo to the list of places we've been.
Tokyo, like Osaka and Kyoto, is a very clean city. Everything seems very orderly, at least in the small area we saw. Several of the shops had potted plants out in front, which reminded us of Bangkok. We had noticed before that restaurants "post" their menus in the front window, so their patrons can see what their meal will look like. I think that is a nice custom, as it brings the menu to life and makes it far more attractive than a simple printed menu.

Another outstanding feature for me was the fact that the harbor area is as nice as every other place we saw. So many port cities have their docks in run-down areas that this was a very pleasant change. The same was true for Osaka.

The Kabuki theater, with its very traditional architecture, was an interesting sight in among all the very modern structures. The design on the twin skyscrapers was fascinating to me, as I am used to seeing very plain buildings that are rather devoid of any kind of artistry. Also of interest was the lone tower that almost completely blended into the haze.

One of the nicest memories from Tokyo was that we left the port while dining in the Pinnacle Grill. We had a window table and throughout dinner had a beautiful view of the lights of Tokyo.

In Hakodate the only thing we did was go to the morning market. We saw all sorts of seafood, including squid, lobsters, and many large crabs as well as shellfish. The most interesting to me was something called a sea pineapple, which was about the size and shape of a small Thai pineapple. It looked to be related to sea cucumbers. While it may be edible from a technical standpoint, I can't imagine eating it. I was not able to find out how it is prepared.

We also found an ice cream shop that served wonderful ice cream. The flavors we chose were sesame (which was gray in color), green tea, and mango. The sesame was the only unusual one, and while one bite tasted good, I was very happy to go back to my mango. I don't think I would ever choose to order sesame ice cream.

Unfortunately I have no pictures of Hakodate. I did not think to upload them to my computer immediately and they were lost when my camera malfunctioned in Petropavlovsk. The most memorable photo I lost was of the sea pineapple. I am hoping to get some photos of Hakodate from a friend when she has time to send them to me.

Once we left Tokyo, headed for Russia, we sailed along the Kuril Islands, which were very picturesque. We did not see any signs of human habitation, but they were an imposing sight.
Posted by Jesusan at 12:51 PM