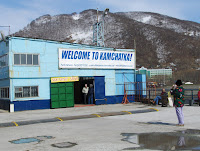 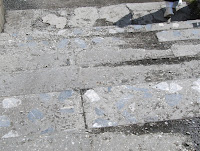 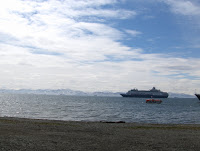 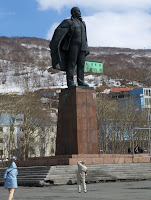 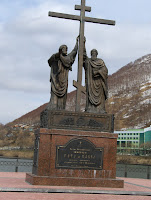 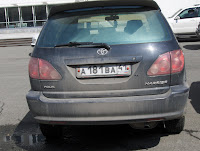 Petropavlovsk evokes many feelings. It brings back memories of when I first heard its name in a song by Tom Lehrer, where there was a long list of names of Russian Cities. The city lies near the tip of the Kamchatka Peninsula, and the name "Kamchatka" has fascinated me since childhood. I did not venture very far into the city because my foot was making walking difficult, but the whole experience of Russia was quite memorable.

For starters, although Russian customs officials boarded the ship early, they took most of the day to review all the passports. All shore excursions had their departure times altered. As I recall, nobody got off the ship until after lunch. Those who wanted to go ashore independently were finally able to board the tender around 3:30 PM. In my opinion, our experience here demonstrated that everything we've ever heard about Russian beaurocracy is true.
Petropavlovsk is the most desolate place I have ever seen. Spring had not yet arrived when we were there, so the trees were bare and there were no flowers blooming, but even brightly colored houses could not cut the feeling of desolation. I have posted a photo showing the condition of the sidewalks in the area I saw. They are disintegrating, and the roads are not much better. Everywhere we saw people sitting around drinking. I'm certain that if I had to live there, I, too, would pass the time by drinking. Some friends who walked further into town reported that what they saw was not much better. I also heard reports from people who had taken shore excursions. The one featuring museums was apparently okay, but the farmer picnic was a huge disappointment because it was not what it was advertised to be.
When I looked at the parked cars I was surprised to see that their license plates use the western alphabet and words. The 90-gallon trash cans were also surprisingly familiar.
Petropavlovsk boasts the only remaining statue of Stalin in all of Russia, which is a prominent sight from the time you step on shore. The other prominent sight, across the bay, is the peak of a snow-covered volcano. The day we were there it was mostly obscured by low clouds, but it was still a beautiful and awe-inspiring sight.
In the end all of us wondered why Petropavlovsk was a port of call for a cruise ship. The Russians would apparently like to have tourist traffic, but unless they change their approach to letting passengers off a cruise ship, it won't happen. And by the way, it is possible to pronounce the name of this city using all the letters. It takes practice, but it can be done.
Posted by Jesusan at 1:48 PM