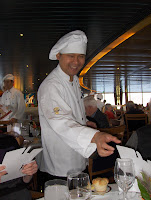 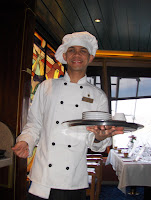 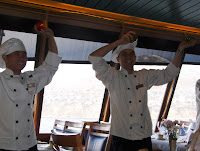 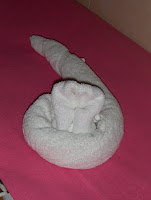 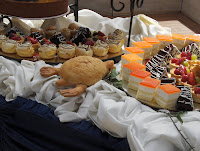 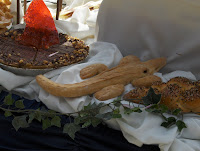 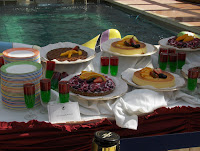 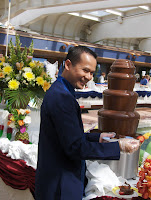 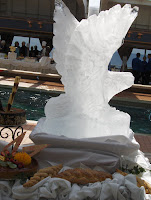 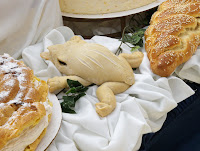 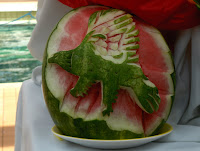 The two most prominent special occasions "aboard the beautiful and elegant Statendam" were the Master Chef dinner with its special menu and great performance by the dining room stewards, and the Dessert Extravaganza. Of these I was able to take photos. The other two prominent special occasions were the Indonesian Crew Show and the Filipino Crew Show.

Some of the dining room stewards have said that they feel silly putting on the show for the Master Chef dinner, which I understand completely. However, at the same time, I'm glad they are willing to do it because it adds an element of fun to an already special dinner. Their antics are far better than the traditional baked Alaska parade. The photos of the stewards in their chef costumes are Budi and his assistant, Eggi, both of whom made our dining experience very special and enjoyable.

The dessert extravaganza was held in the afternoon on this cruise, which I found unusual. As always, the display was spectacular. There were the usual ice sculptures, carved watermelons and vegetable flowers, in addition to a myriad of pastries of different kinds, and fruit kabobs for dipping in the chocolate fountain. That is our dining room steward Budi at the chocolate fountain. I think my favorite were the bread animals - alligator, frog and turtle. Amazingly enough, I was able to take dozens of pictures and not be tempted to eat anything.

It was special every evening to return to the cabin because Farid, our room steward always left us a cute towel animal. Of all the ones he did, the cobra was my favorite.

Although we were encouraged to take photos at the crew shows, I chose not to do so this time, because I could not get a seat that gave me a good photographic vantage point. The shows were wonderful. The crew spends such long hours working, and then some take extra time to rehearse and put on a show for the passengers. They do a great job, and I appreciate the opportunity to learn about their culture. One of the dining room stewards wrote out some Indonesian phrases for me, and I really enjoyed being able to greet them in their native language.

The most fun part of the crew shows was that Michael, our wine steward, was in the Filipino crew show, in the rice planting dance. All the dancers are men but half are dressed as women. Michael was one of the very buxom women (thank you, balloons!), and was wearing a blond wig that mostly covered his face. However, it was not enough to keep me from figuring out that he was the one in that wig. The next evening at dinner, we teased him a little about it, which was fun. He is also easily the nicest and best wine steward we've ever had.
Posted by Jesusan at 3:54 PM