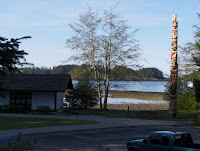 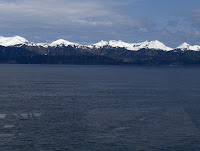 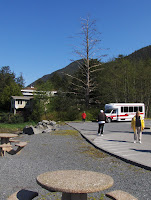 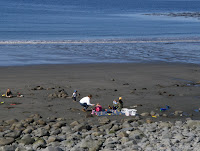 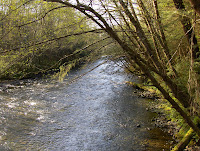 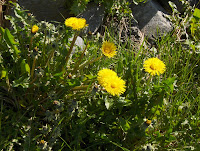 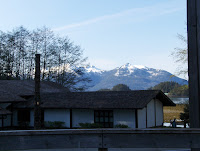 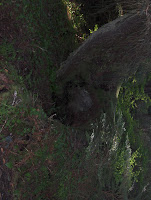 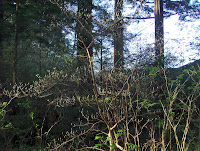 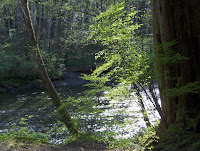 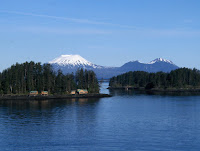 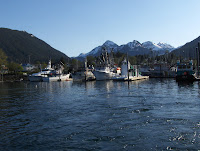 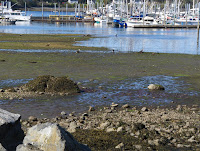 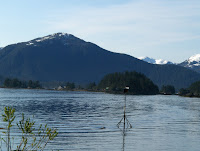 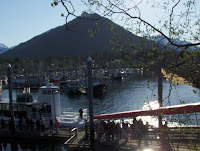 In Septermber, 1988 I went on an Inside Passage cruise, which was my introduction to Alaska. On that cruise I spent most of my time on deck, photographing the scenery. Prior to this trip I had never seen anything on a scale this big. It was obvious to me from the start that Alaska was the most beautiful place I'd ever seen. The ports of call for that cruise were Haines, Skagway, Juneau, Ketchikan, Tracy Arms Fjord; we also cruised through the Misty Fjords, where we spent some time following whales. It was a unique experience to look at the ship's wake & discover that we were going in circles following the whales. Much of the beauty of Alaska lies in its pristine nature. I also like it better than the beauty tropical places because Alaska is so much cleaner and more orderly.
The course between Hubbard Glacier and Sitka was full of whale-watching opportunities. The whales were seemingly everywhere. It was fun to see the team trivia game and an exercise class interrupted for whale watching. We saw so many whales that it seemed as if they came out to play and perform specially for the benefit of the cruise ship passengers.
Given the progression I had seen in the ports previously visited, going from desolate to pretty, I expected that Sitka would be nice. However, I was not prepared for the amazing beauty and perfection of that area. Spruce and snow-covered mountains were everywhere, but the dominant sight was Mt. Edgecumbe, an ancient, long dormant, snow-capped volcano on nearby Kruzof Island. From what I understand, the very next peak is also a volcano.
Here, as at every other Alaskan port we saw this time, the bald eagles were everywhere. While we were there the tide was out, and the tidal flats were littered with eagles, both adult and immature. There were also many flying about, soaring with the mountains as backdrop. The dandelions were also everywhere and very healthy; I took that photo for my friend, Buddy.
This time we actually went on a shore excursion. Our tour guide, Jolene, is from the Tlingit tribe. She took us first to the Sitka National Historical Park Visitor Center, which featured Tlingit totem poles outside and a video presentation along with wonderful exhibits inside. The Tlingits do gorgeous beadwork and wood carving. We got to talk to a wood carver and see several of his works in process. Outside, we went for a walk in the woods, where we saw a beautiful salmon stream and learned about native plants and their medicinal uses. Following that we stopped at the Sheldon Jackson museum, which had an amazing amount and variety of items displayed, especially given the small space it occupies. We had a chance to talk to a woman who does incredibly beautiful beadwork, who was from the Athabascan tribe. After that we went to a spot where we could take photos of Mt. Edgecumbe without obstructio. That is where we saw the eagles on the tidal flats and also a family picnicking on the beach. The air temperature was in the 50's and quite pleasant; it just seemed out of place to have a picnic on the beach in Alaska. Kind of like the Tropic Lanes & Lounge in Kodiak.
Our final stop on the tour was to see the New Archangel Russian Dancers. The show was almost half over by the time we arrived, and we only stayed for three dances because they did not do anything to pique our interest. We were interested in finding a few remaining souvenirs we needed so we went shopping instead of touring St. Michael's Cathedral. Unfortunately, due to the tides, our stay in Sitka was very short; I think the last tender back to the ship was at 11:30 AM.
The place I would go see were I to return to Sitka, is the Raptor Center. A wildlife tour would also be great, for the opportunity to see creatures we don't encounter in our normal life.

Long after we left Sitka, as we were on deck walking a mile for "dam dollars" we could see the peak of Mt. Edgecumbe above the horizon. We also had more wonderful times of whale watching. I don't know if the time of year is the reason why we saw so many eagles and whales, and possibly a sea otter, but I would certainly go to Alaska in May again. I'm looking forward to a return trip to our most beautiful state.
Posted by Jesusan at 2:43 PM