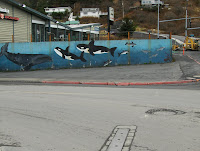 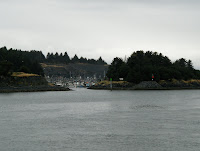 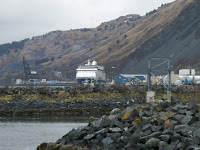 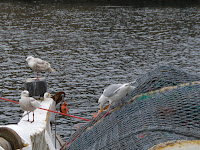 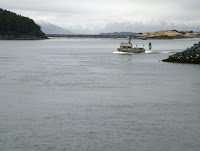 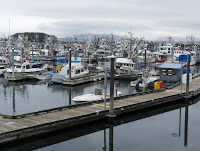 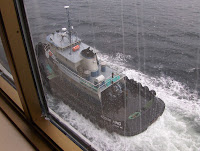 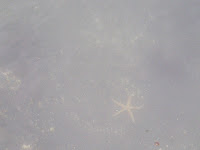 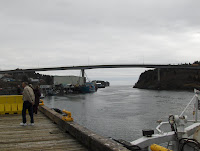 Kodiak was a nice port. The town is very small and there is not much to do there, but the harbors are beautiful, and the backdrop of island mountains is spectacular. When we were there in mid-May, spring had yet to arrive, but it was close. We could see that the deciduous trees had leaf buds that were ready to burst. Of course the ever-present Sitka spruces were covering the mountains, which added to the ambiance of the place. As usual, we took a shuttle into town and just walked around, seeing what was there. Shuttles are very helpful when you don't know how far it is in to town. In this case we discovered it wasn't far and decided to walk back to the ship when we were ready. We found a couple of nice gift shops, but the main attraction for us was the harbor.
While there we saw a Steller sea lion swimming, saw a starfish in the water, which was pointed out to us by a young boy, and we had fun watching bald eagles and seagulls. There was one eagle who would sit on one lamppost for a while, watching the people and then fly to another one to do the same. Those two lampposts are apparently his habitual hangouts. It was also interesting watching the gulls pull fish from the net on a fishing boat. The last of the wildlife we saw was a pair of magpies, another new bird for me. We saw quite a few bald eagles in addition to the one mentioned before, both mature and immature.
I was interested to see the packing/processing plant for the salmon cakes I buy at Costco, and also enjoyed seeing the Tropic Lanes and Lounge with Alaska license plates on the cars parked in the lot. On the way home we saw a sea-life mural painted on a wall, which added a colorful note to the town. Even though Kodiak is at a similar latitude to Petropavlovsk (can you say it yet?) and Dutch Harbor, the atmosphere is very, very different. Although rather plain, there is none of the depressing atmosphere of the other two places.
On our way home we ended up talking to a pair of young men in a pickup truck who stopped to talk to us. That was a lot of fun. We also appreciated the security guard who had been handing out maps outside the ship. He was the one who identified the magpies for us & told us what the deciduous trees were - aspens, if I recall correctly.
For those who want to do shore excursions, Kodiak is an excellent place to do so. They have museums, and best of all, tours of the large wildlife preserve. If I were to return to Kodiak I would make sure to see the wildlife preserve.
Posted by Jesusan at 1:20 PM