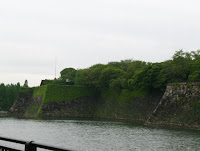 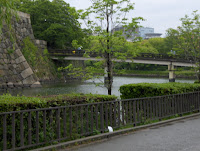 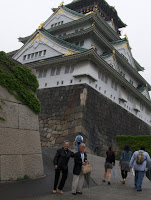 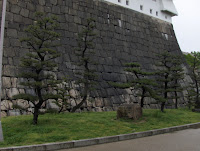 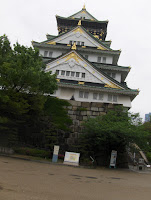 Osaka is an interesting city. It was a major undertaking to get there from the airport, but when we arrived we found it to be very clean and picturesque. The rail system is excellent and easy to use once you know what to do, although the large stations can be quite confusing. We also discovered that rush hour is not the time to be lost in a station,because of the tsunami of people you encounter that is flowing through the station. We have never seen such masses ofpeople anywhere before.
Another interesting feature in Osaka is that the traffic lights at many intersections broadcast bird calls to let you know that it is permissable to cross the street. At each intersection there is a different bird sound. The same thing is true in Kyoto.
Osaka is not a tourist city, but it does have at least one major attraction, the Osaka Castle, which was home to a warlord's family. It is currently a museum which has wonderful displays of ancient coats of mail & weapons, along with a huge silk-screen painting depicting a major battle, & a model of the same battle. There is an observation platform around the top of the castle that affords a gorgeous panoramic view of the city. The approach to the castle is beautiful, with the moat and the walls built of huge ballast rocks. Osaka Castle is definitely worth a visit & is a place I would return to.
Posted by Jesusan at 12:00 PM