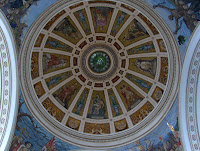 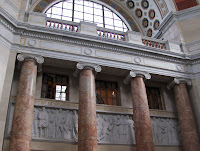 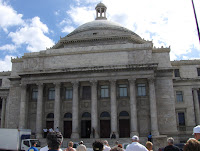 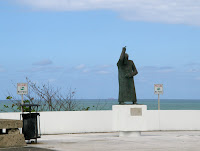 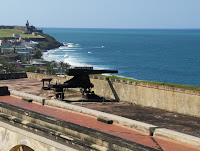 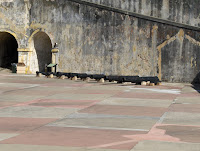 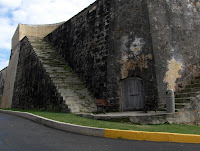 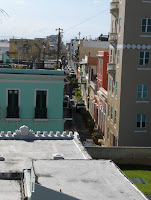 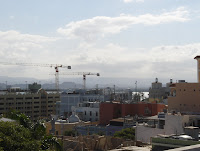 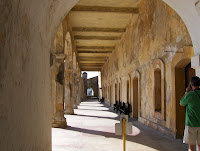 This time I finally made it off the ship and into San Juan. Our group did a tour of old and new San Juan. The first stop on the tour was the capitol building, from which one can view the statue of San Juan Bautista (St. John the Baptist). The statue is a rather strange one, with a more contemporary form than one would expect in such a place. The capitol building is located in Old San Juan, as is Fort San Cristobal, which dominates the landscape near the end of the island. We spent quite a bit of time exploring the fort, which is very interesting if you like that sort of thing. It's also a great place to get some aerobic exercise, as there is a pretty steep hill leading up to the highest area of the fort. The views from the fort are spectacular.
I found the 3 flags interesting. Of course we all recognize the flag of the United States. The middle one of the trio is the flag of Puerto Rico. The third flag is the flag of the Spanish army. The flags were flying at half mast to commemorate the passing of former President Gerald Ford.
The tour of New San Juan was rather perfunctory. We drove through & got some descriptions of what we were seeing, but did not make any stops. The only photo I was able to get was of the park with the contemporary sculptures. There was one thing I wished I could have photographed, but I was on the wrong side of the moving bus to get it. It was a large tree with whorls of large, shiny dark green philodendron-like leaves at the ends of the branches, and a large bud of some sort at the end, which was reminiscent of a candle flame. The naturalist in me is always frustrated when there is no way to identify interesting plants, animals or birds.
The end of the tour let us off in shopping area, but we just walked back to the ship. I think we had a pretty good guide, but I had a very difficult time understanding what he was saying. Part of the problem was the level of noise from the bus engine. The rest is that either he had an extremely heavy accent, or he was speaking a combination of English & Spanish. If it was the latter, it could be because he was rather stressed. When we emerged from the Capitol building we ended up on someone else's bus because our guide's had broken down. Fortunately for him, the repair was simple, a new air filter for the diesel engine.
The portions of the city we saw seemed pretty nice, but other than wanting an opportunity to photograph & identify that one tree, I don't have any reason to want to return there. Once through the fort was plenty.
The adventure continues in just over two weeks when we leave for an extended stay in Thailand, followed by a cruise from Osaka, Japan to Vancouver, British Columbia. We should have lots of opportunities for great photographs. 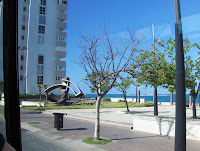