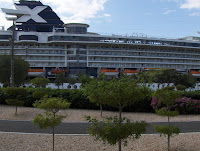 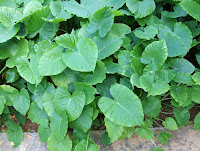 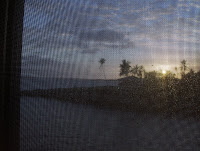 Unfortunately I cannot say much about Casa de Campo, Dominican Republic. I was not feeling very well, but got off the ship with the intent of taking the shuttle bus to both the old town and marina. But by the time there was a shuttle to take us, I was feeling so bad that I couldn't get on. It took a while to gather up the energy to walk back to the ship. I did get three pictures while off the ship. The one of the plants I took just because I thought they were pretty. My friend did do the shuttle ride & told me afterwards that I had not missed anything.

The last picture, of the sunset, was taken through the fabric screen over the dining room window. We could see through it just fine, but the camera lense was unable to ignore it. We had the great fortune to have a table in a corner, right next to a window, so we frequently had pleasant views at the beginning of dinner. This sunset was really spectacular, but in a quiet sort of way. It was as beautiful in its own way as the one when we were leaving St. Thomas.

Next up: I finally got to see San Juan, Puerto Rico.