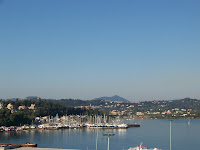 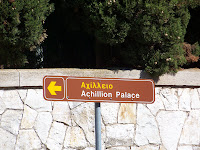 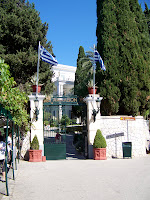 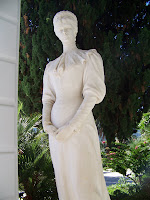 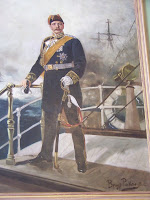 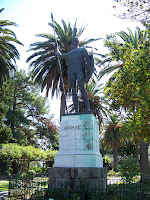 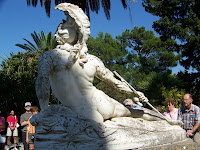 Today we arrived at Corfu, a Greek island that is new to me. The initial view was beautiful, as expected. Our tour took us first to Achillion Palace, built by the Empress Elizabeth (also known as Sissi), wife of Austro-Hungarian Emperor Franz Joseph. She spent a lot of time estranged from her husband, was not allowed to raise her older children, and so, did a lot of traveling. She fell in love with the island of Corfu, and there built a palace that was dedicated to Achilles. She retreated there after the unexpected death of her son, Rudolf, apparently a suicide. The palace was later bought by Kaiser Wilhelm II. The painting of him is unusual, as it shows both hands. Most of his portraits show only the right hand, because the left one was deformed.
The grounds of the palace are extensive and beautiful, as are the views from the gardens. The interior of the palace is very ornate (you can find better photos than I was able to take if you Google Achillion Palace). Our next stop
was Kanoni, supposedly a place where the French had left a canon - if they did we never saw it, just some nice views, including Mouse Island, named for its shape.
On our drive back to Kekira
we passed some 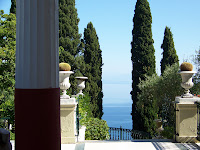 Roman ruins. When we left the bus, we walked past the monument to the Ionian Islands. The bus had 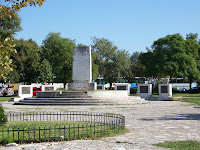 stopped near the old fort, so we had a good view of it. We walked around the town a little bit, and saw the church of St. Spirion, the patron saint of Corfu. After that we had some free time for shopping before heading back to the ship. We weren't interested in souvenirs, but we did findsome Mythos beer, which was
quite pleasant. 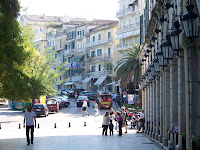 While we enjoyed our tour, Corfu was not as interesting or as beautiful as the other Greek islands I've been to. 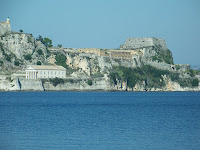 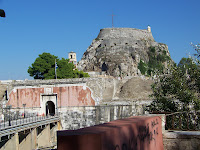 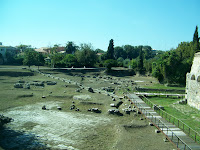