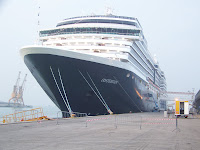 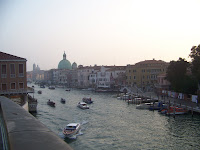 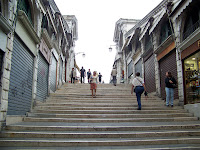 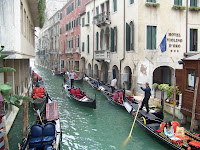 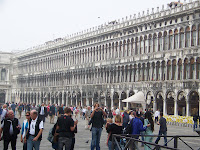 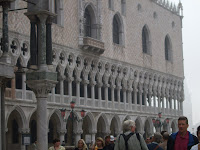 This cruise started out in a less than stellar way. For starters, while we were driving to the airport in San Antonio it was pouring rain. It had stopped long enough for us to load our car, but there was a huge accumulation of water on the highway, which got into places in the car that made several engine lights come on. We did make it otherwise safely to the airport and had an easy trip through security and on time takeoff. Our landing in Chicago, where we had to change planes (and airlines) was superb - one of those rare ones where you had to figure out that we'd landed. Our flight over the ocean between Chicago and Frankfurt was more than an hour late getting off the ground. We made up some time in the air, but not enough. Our seats were near the back of the huge plane, and when we got to security there were an incredible number of people waiting to get through. By the time we got to our gate, the flight was long gone. Frankfurt airport is spread out over a large area, and we had to walk all the way from our gate (26) to the ticket desk, which was beyond the security area, to get our tickets changed. The clerk kindly gave us a voucher for €15, which was enough to buy us each a sandwich and bottle of water. We had to wait less than three hours for the flight, but the new one was leaving from gate 36. On the overseas flight the lights had come on in the plane cabin about an hour after we finally decided to try to get some sleep, so by the time we did all this walking, hauling our carry on bags and computer, we were wiped out. The flight to Venice was uneventful, but trying to find out what was happening from the Holland America people who were there to meet us, was difficult. We did make it onto a bus that took us to the ship. The first thing we did was take a short nap, because by that time we'd been up for more than 30 hours. At dinner we were surprised to see that our traveling companions had already arrived.
The next morning when we went to breakfast, it was raining, which didn't look promising for walking around the city. However, by the time we were ready to leave the ship the rain had stopped, and we had beautiful weather for explo 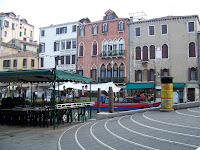 ring Venice. We walked from the ship all the way to the Piazza San Marco, with a slight detour to buy me a handbag, so I'd have something for formal nights. A formal purse was the one thing I'd forgotten to pack, which means it had been too long since I'd been on this kind of cruise. We also decided to walk back to the ship. In retrospect that was not a real smart idea, because we were still tired,we got a bit disoriente 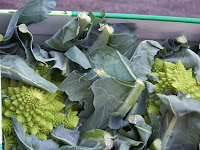 d, and ended up walking at least five miles round trip. It was very pleasant to walk through Venice when there weren't huge throngs of tourists, yet we were surprised to see how many tourists were there. Apparently the recession hasn't completely killed the possibility of travel for many people, a good thing. While walking we saw an unusual vegetable at one of the outdoor markets (looked like broccoflower with pointy to 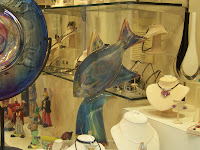 ps), and of course, plenty of Murano glass. We also saw a large, gold colored Bvlgari handbag, with a price tag of €1700! Can't imagine paying that much for something like that, especially when there's no way I'd ever carry it if I had it. By the time we got back we were ready for lunch and a relaxing afternoon. We played team trivia (we were disappointed that we didn't win, because the prize was mugs), and of course attended the life boat drill.
Posted by Jesusan at 4:33 PM