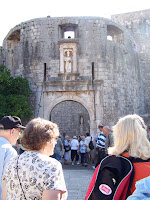 Our visit to Dubrovnik, Croatia was long awaited. We were supposed to go to Split, Croatia on the world cruise, but were unable to go ashore due to very rough seas (that port requires us to drop anchor and use tenders to get ashore). We were blessed to have a beautiful, sunny day, and an excellent guide, Kristina, for our "Cultural Dubrovnik" tour.
The first stop was the old walled city of Dubrovnik. We entered by crossing over a draw bridge. The entire city, including the wall, is built of limestone. The walled city has been designated a UNESCO world heritage site. One can walk on top of the wall (we didn't have time to try that), and there are many interesting things to see in the city. The city is protected by its patron saint, St. Vlaho. One can still find evidence of the 1992-1993 war, known as "The War", when Yugoslavia was splitting into independent states. We explored a church, a monastery, a cathedral, and a governmentbuilding. The town was ruled by a council, and each month a different man would be chosen leader. For that month the man had to live in the government building ALONE (no wife, no nothing) while he was there. I'll bet that was interesting! At the end of our tour of the city we had a little free time for shopping and other sightseeing. All the travel souvenirs we brought back came from here, because we felt like it would be the most exotic and appealing place to
have gifts from. 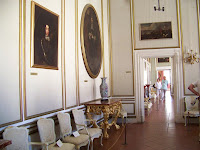 After a brief photo stop along the coast, our next stop was Cavtat (pronounced Sov-tot), the old 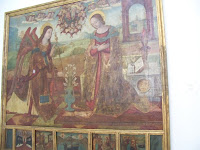 Dubrovnik seaport, which is now a resort. We had a little bit of a guided tour, plus a little time to shop again. The waterfront area was very pleasant. We had to pay to use the restrooms, but they were very clean, and not too expensive.
Finally we headed out to Konavle province, where
we would be visiting 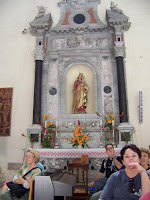 a farm where they produce their own wine and olive oil. We had been told we'd have lunch on the trip, and it turned out that lunch would be around 3PM, the last part of the trip. Needless to
say there were some people who
were very upset about that. I have to agree that it would have been nice to know that beforehand. Along the drive we saw the 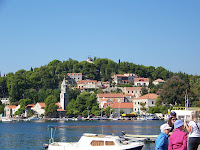 strange looking building that looks like a windmill without blades. It is a ham smoker. We also learned that in the rural areas, when a son gets married, the family builds a new house onto the old one, so the family ends up
living in what looks like a row house on their farm. Finally we arrived at Kuca Glavic, and were greeted by the family, and live music. We were first treated to local figs and a shot of raisin brandy (very strong). This was followed by a tour of the winery and olive oil press, and then lunch. The lunch included some of their red wine (which
was quite nice), home made bread, sausage, potato salad, and tomato salad. While we ate we listened to the two 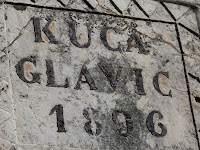 folk musicians (a group called Klapa Astral), who played accordian and guitar, and also sang. They were 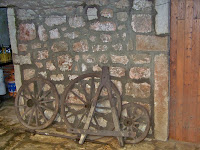 really good, and they made the lunch even more enjoyable with their good harmony and
upbeat music. We bought a 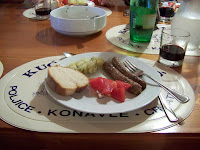 small bottle of their olive oil, and a small framed embroidery (they do beautiful embroidery work) as souvenirs.
By the time we got back to the ship, it was time to dress for dinner. Needless to say, we weren't very hungry, so ate a light dinner. This was an altogether enjoyable day. Dubrovnik, or anywhere else in Croatia, is on my list of places I'd like to return to. 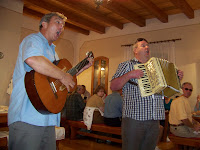