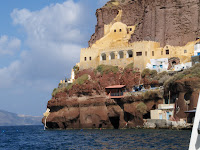 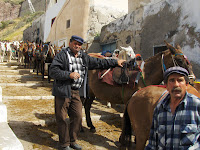 Santorini was a revisit for us. Since we had gone on a formal excursion last time, this time we decided to ride donkeys up the 600 stairs that go between the dock and Fira Town. The stairs take a switchback path up the mountain, and the retaining wall is not very high. As one whose balance 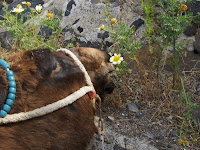 is not the greatest, I did not appreciate my donkey's love of the edge. We found that our donkeys would only go a short distance before stopping for a snack. And nothing would get them going until they'd had a few bites. That is one adventure that I would not try again; for me feeling that precarious is scary. Unless you have serious issues with fear of heights or balance, i 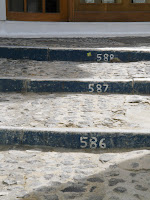 t is a fun trip. We walked around town a bit, bought some CDs, and then took the cable car back down to the dock. 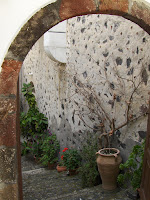 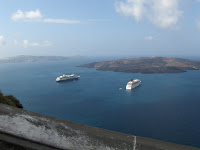 Santorini is a very scrubby island, but the villages are beautiful, most especially Oia. It is where picture postcard photos are taken. For me, one of the fun things about the island is that we drop anchor in a caldera. This time it was also fun because we saw the Zenith there also, the ship which we had really enjoyed when it belonged to Celebrity Cruises. 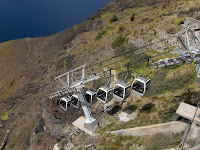 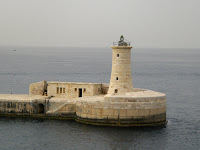 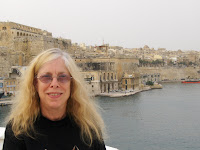 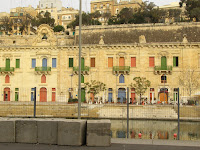 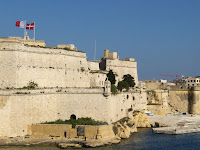 I was delighted to be able to return to Malta only about five months after my first visit. My first visit was in November, the second in April, so I've gotten to see it in different seasons. Malta is beautiful at any time of year. I fell in love with Malta the first time, and that was cemented with our second visit. When you sail into the grand harbor at Valletta, you see ancient fortresses on either side of the opening, which introduce you to the history of the island. I think one reason I find Malta to be so special is that it has such a great depth to its culture. On this trip we learned that Malta has some monoliths that antedate even the ancient Egyptian culture. Malta has been influenced by several other cultures over the centuries. On this island, the modern and the very old blend together beautifully. I was glad that we arrived the afternoon before we were supposed to get there, because I could truly enjoy the sail-in. Much of the old parts of Valletta are a deep ocher color, and I love the buildings by the dock with their brightly painted doors and shutters.

Whether in the city or countryside, the island looks very neat. All the fields are enclosed with dry-stack rock walls, 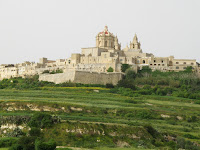 and many use prickly pear cacti as wind breaks. In the city it is fun to see the famous Maltese buses. 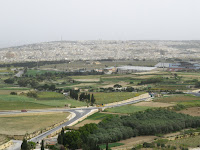 On this visit we saw some historic churches, and visited the medieval capital, Mdina (pronounced Em-Deena). It is a gorgeous town, and a very exclusive area where people still live. There is no automobile traffic there.

Malta is famous for its glassware, which I fe 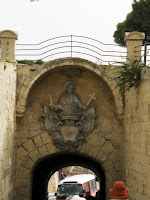 ll in love with on our first visit. This visit I took the opportunity to buy a beautiful vase (not the cherry red/deep pink I originally wanted - and still do want, 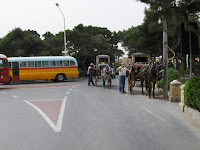 even though it won't go with anything we have). The Murano glass factory in Venice is famous for its glass, which is wonderful. But for me, nothing surpasses the Maltese glass, perhaps because the style is softer. 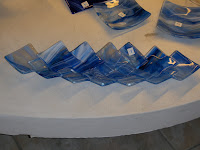 There is still much more of Malta to see. One thing is St. John's Co-Cathedral in the city of Valletta. Another is the island of Gozo. I'm looking forward to visiting Malta again. At the time of the first visit I knew nothing of the island, and had no expectations, so it was a very pleasant surprise. And it is a place I would recommend to anyone.

Gibralter. The famous rock. The famous apes. I started out with disappointment because I never did see directly, the view of the rock that is so familiar. We passed that early in the morning while I was still asleep. That aside, we had a grand time in Gibralter. We chose to walk to the cable car and rode up to the top, where we had spectacular views and close 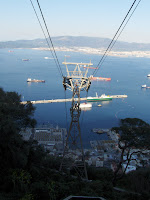 encounters with the apes. We felt that the souvenirs up there were ridiculously expensive, so we did not buy anything, although there were a few things that were 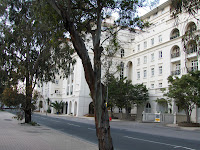 tempting. After taking the cable car down the mountain, w 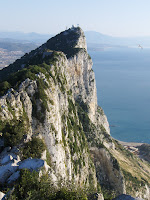 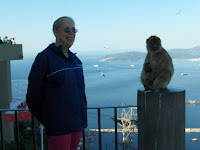 alking through the botanical garden, which was very beautiful. While there we hooked up with another friend from the cruise. I was very glad of that, because as the three of us were walking back, Tina spontaneously decided to stop in at a church service, and I would never have found my way back alone. Even with a companion, it was a bit of a challenge to get back to the ship. And were we ever tired by the time we did reach the ship. That was quite a bit of walking.

Our travel agent had advised us against taking a formal shore excursion in Gibralter. However, were I to go again, I would take suc 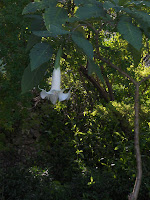 h an excursion because it would offer a chance to see and learn first hand about how the rock was used as a fortress during World War II.