More of the Thailand Experience 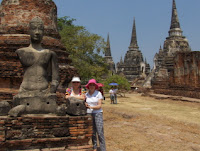 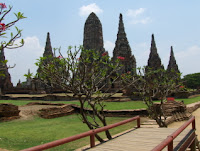 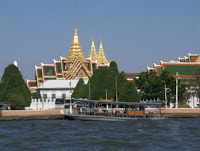 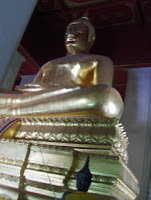 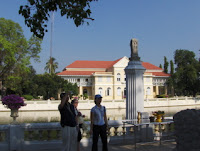 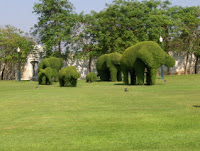 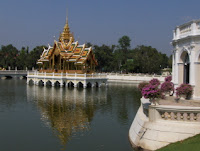 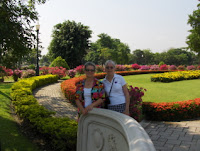 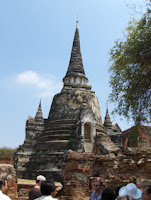 We have been in Bangkok for three and a half weeks now, and it remains a fascinating place. We are feeling quite at home here, and have gotten to do some exploring. Bangkok is a city of great contrasts: corrugated tin shacks and beautiful skyscrapers; a Mercedes Benz parked next to a trash heap; street vendors with push carts or sidewalk stands next to American retailers like Versaces, Tony Roma's, Pizza Hut and 7-11.

Sunday afternoon we set out to find a grocery store, and found a supermarket not too far from our hotel - Foodland, on Soi 5. It is in many ways like an American supermarket, but the produce is significantly different. At the same time there were many recognizable name brand products, some of which we would see only on the international food aisle at home. In the bakery section they even had very large powdered sugar donuts (Deb, this one's for you!), which looked like the special ones created for us on the Millennium.

The street vendors seem especially numerous on Sunday afternoon. There were the usual push carts selling food, and the edge of the sidewalk on one of the main streets was lined with vendors selling everything from watches to t-shirts, silk boxer shorts to carved elephants. We also encountered several beggars along the way, each with a different style of approaching the passers by.

One of the nice touches we've seen on several of the major streets is vine-covered arbors that form a canopy over the sidewalk. They help to provide respite from the heat and the lack of rain. Apart from the widely varied architectural styles of the skyscrapers, the streets seem to have a pretty uniform look to them, no matter where you go in the city, and most of the apartment buildings look pretty dilapidated.

It is interesting to watch the way the people do things here. They use handmade brooms that don't look like they'd do much good, but which are very effective. This morning I learned a new technique for dousing a fire. Hold a plastic bag containing about a gallon of water directly over the flames. The flames will melt the bag and the fire will go out quickly.

Last Saturday we took a day trip up to the Bang Pa-In, the summer palace in the old capitol of Siam. The trip to the palace was by air-conditioned tour bus. We had a great tour guide named Mannie. She had a great personality & gave us a wealth of information about her country. As we passed fish farms, rice paddies and vegetable gardens, she told us about how it was no longer possible to see water buffalo working, because they have become extinct here. She also pointed out salvage stores where there were great quantities of old wood taken from demolished buildings. Recycling wood is now big business because logging is no longer allowed in the country.

We learned that Bangkok has a population of 10 million. In the country as a whole, 65% of the population are farmers, 25% are factory workers, and 15% work in all the other professions, such as offices, hotels, service, medical, technical, and repair. Mannie taught us a lot about the history of Thailand and the four kingdoms. The current king is 80 years old and has been on the throne since age 28. The queen is 74 years old. The king is very popular because he has done much to better the living conditions for the Thai people.

If you watch the people go by, you will see that many of them wear bright yellow polo shirts, with an emblem on the chest pocket. We saw them for sale in a Thai market, but did not learn their significance until we went on our tour. It turns out that there is a color assigned to each day of teh week, and the color for each day is believed to bring good luck. The colors are as follows: Yellow for Monday, Pink for Tuesday, Green for Wednesday, Orange for Thursday, Blue for Friday, Purple for Saturday and Red for Sunday. The significance of the yellow shirts? The King was born on Monday, so the people wear the yellow shirts to honor him.

The summer palace includes a number of residences on extensive acreage with lots of water and beautifully landscaped grounds. The clean, ordered look of the palace grounds is in strong contrast to the generally trashy look seen everywhere else. We have never seen so much trash lying around as we have here in Thailand. One palace is done in European style, while another is Chinese in both architecture and furnishings. Neither of these is in current use by the royal family. There is a current residence, plus one built for one of the royal daughters. These are not accessible to tourists.

After touring the palace, we went to Ayuthaya, a temple with a huge gold Buddha, and extensive grounds with ruins from temples destroyed during wars with Burma (Myanmar), and several huge stupas, which are burial urns. The Thais do not bury their dead. The dead are cremated and the ashes placed in urns on temple grounds. The stupas for ordinary people and families are small. Kings have huge ones, and each king has his own. Apparently treasure is buried with each king.

We also saw a Chinese cemetary. They use above-ground crypts, which are covered with earth & grass, and are arranged in a very neat and orderly fashion. This contrasts greatly with the cemetaries in Jerusalem, which seem helter-skelter in their arrangement.

Our final stop before starting our river cruise was a Cambodian temple, which was also in ruins as a result of the wars with Burma. This one had a low wall around it, which holds 129 headless Buddhas.

The river cruise was fun. They served an international buffet lunch, which was excellent. The scenery as we traveled down the river was also very interesting. We met some fellow tourists and had some great conversations with them. The boat dropped us off at the mall where we had met our bus in the morning. All in all a great day. Will have to post photos later.
Posted by Jesusan at 7:50 PM