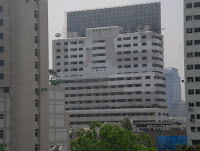 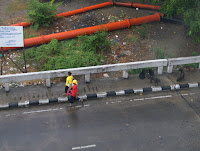 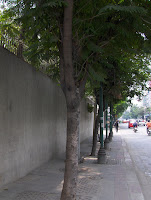 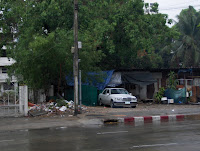 We continue to watch out the window of our hotel room and the window of the coffee shop, because there is always something interesting happening. Sometimes it is seeing the push carts go by, sometimes watching people walk in a slalom course around the stray dogs that own the sidewalk. It is likewise interesting to see and try to figure out what the street vendors are selling. There are street vendors everywhere.

Tonight while we were eating dinner we noticed that a policeman had stopped a moped that was traveling the wrong direction on our very busy one way street, and was writing a ticket. He then stopped a second moped for the same reason. However, this time, instead of writing a ticket, he got on the back of the moped (which had turned around), and went riding off holding his ticket pad.

We continue to watch the construction project next door, which is using huge quantities of rebar, and which makes no sense at all to us. The Thais definitely have their own way of doing things. Another example of that is the photograph of the building being painted. There is no discernable logical progression in the process.

We have been taking a camera with us as we walk, in an effort to paint a picture of what we see every day. The side streets with all the shops are interesting. Even the laundry hanging on all the apartment balconies adds to the ambience of the city. The sidewalks have many obstructions in addition to the stray dogs. There are posts for the arbors that are covered with vines, lamp posts, trees, signs for the cafés, barricades, bus benches, phone booths, beggars, moped traffic, cars and mopeds parked on the sidewalks, to name just a few. The sidewalks are also treacherous because their surfaces are very uneven and unpredictable. One of our favorite local incongruencies can be seen in the photo of the Mercedes.

We have finally started seeing cats around. For the first few weeks we were here there were none to be seen. Now they appear occasionally. Most seem to be a brindle coloration - I know that's a term reserved for dogs, but it is the only one that accurately describes these cats.

I hope that eventually I will have a catalog of the architectural styles of the skyscrapers here. Unlike in US cities, there are skyscrapers located throughout the city, giving it an extended skyline. There is a great variety of architectural styles in these buildings, some of universal design, and others with a clearly Asian flair. Until we started observing the architecture in Bangkok, we had no idea that there could be such a variety of design in tall buildings.

Another interesting thing we've observed, when we've been at Bumrungrad International Hospital, is that when it rains, they have a whole brigade of people operating mops and squeegee brooms on the walkways around the hospital, to keep them safe and easy to navigate.

There are many stores and brands here that we recognize from home, but they seem to have a special Thai twist to them. For example, Pizza Hut serves salad with their pizza, but it is clearly a Thai-style salad rather than American. The photo of Ronald McDonald says it all for McDonald's. The pose shows the typical Thai greeting of respect. The other aspect of McDonald's that is clearly Thai is the attitude of the workers. They are always pleasant and smiling. It's nice to know that the Thai influence affects such American institutions.
When we went to Damnoen Saduak, the original floating market yesterday our tour guide told us that they always have many tickets for a tour that includes swimming with the crocodiles, but very few takers for those tickets........ We thought that was cute.
Posted by Jesusan at 8:25 AM