Dominica is a beautiful island.

The day we were there it was cloudy and it rained on and off, but there was beauty even in the rain. 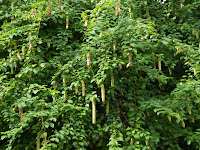 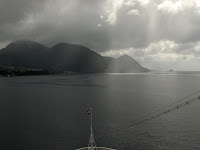 During our time on shore we 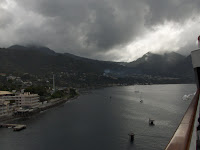 walked to the botanical garden. The garden does not compare to ones like Ber-mu-da's, but is still beau-tiful. Although it was a bit raggedy, it still had a very lush feel to it and was very green. For me there were two disappointments. The first is that the trees were not labeled, so I could not identify the unfamiliar ones. The other is that the endangered parrots were in their breeding season, so the public was not allowed to view them. The parrots were the main reason we chose to visit this garden. 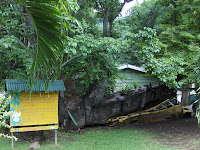 The school bus crushed under the tree was an intesting sight. It happened during a hurricane; fortunately that there were no children on board the bus at the time.
I also found it interesting the way plants grow on other plants in the tropics, even ones that don't seem to be epiphytic. The photo of the palm tree trunk shows two different varieties of fern growing on it, along with a tree that is not familiar to me. That tree really is growing in the space between the bases of the fronds. 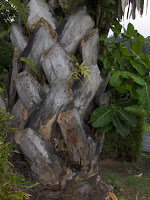 We saw another tree, which I did not get a photo of, that had spherical green & brown fruits about the size of a golf ball. When we broke it open the inside resembled the pictures I've seen of the mangosteen fruit.
The garden also had several areas with brilliant flowers that were very pretty. It was far more casual than any other botanical garden I have seen.
We did see some interesting birds that I was not able to identify. One looked very much like a dark hummingbird, but it had a crest. Another was the size of a large chickadee with a yellow breast and alternating red & white pinstripes on its head. 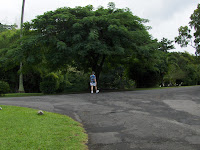 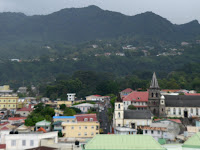 Walking through town to get to the botanical garden was a little scary - between the sidewalks that were uneven or lacking, and the narrow streets with cars that were moving too fast for our comfort. The up side to walking was the exercise and the fact that we did not end up in any traffic jams. We reached our destination sooner than those in taxis. The garden was within easy walking distance of the ship, probably less than a mile, and it was very easy to find.
If I were to go back to Dominica I would plan to take one of the shore excursions offered. A friend took one that included a jeep ride & swimming at the Ti Tou Gorge; he said was very good. Another one that sounded interesting included the Emerald Pool with a scenic drive. I would probably choose the first one.
Posted by Jesusan at 8:28 PM